Session from Studio A - Thompson Springs

Chicago's Thompson Springs brings their Americana and alt-country sound to Studio A this week with music from their brand new album, Homefield. We'll hear them play new songs from that album and talk with the band about the Chicago music scene, mysterious desert people, and about working with Wilco's Pat Sansone.

Find their new album, Homefield, available on Bandcamp and checkout Thompsonsprings.com for more news and tour dates from the band. 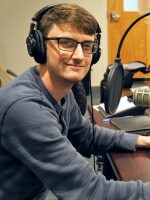 Spencer Tritt
Spencer's creativity shows up in a variety of spaces on-air and online for WNIJ. He graduated from Northern Illinois University with a degree in Communications and Digital Media Production. Spencer's interest in multimedia comes from a mix of his love for arts and music with an interest in technology.
See stories by Spencer Tritt
Sessions from Studio A
Sessions from Studio A is a local program dedicated to showcasing regional and touring musicians, featuring performances recorded in WNIJ's own Studio A in DeKalb and hosted by Spencer Tritt. Have a band you'd like to hear on Sessions from Studio A? Send us your suggestions: sessions@niu.edu