Perspective: Things are heating up

Several years ago, I led an activity called “human spectrum” in my high-school American government classroom. It’s an active teaching strategy for exploring different views on current events. I stood in the middle of the room, while my students moved to the left and right to signify their stance on various issues. The undecided took the middle ground until they were convinced by their peers.

The debating, coaxing, and arguing lit like a fuse. The students sizzled, sparkled, and moved along the spectrum as they made up their minds. My role was to keep things organized and moving. The kids came up with the positions based on their research. This class wanted to debate abortion.

As you can imagine, the sparks flew. Passionate debate burned red hot. Unlike the other issues, barely anyone remained in the middle. All kinds of opinions popped and crackled.

Yet, one student remained strangely quiet. He hadn’t moved from the center at all. I noticed the discomfort; his body language was tense. After a girl made a vibrant and compelling point about rape and incest; he stood up slowly. “That’s me,” he said. “I’m a baby of rape.”

The air had been sucked out of the room and the seconds passed like hours. I didn’t know what to say, so I put my hand on his shoulder. “That was very brave,” was all that queaked out. Next, one by one the rest of the class came to the middle. Some hugged him, some shook his shoulder or hand, and others just came to show they’d been moved. By the end, few remained on the far sides.

This summer, as Roe is certain to turn up the heat, I wonder what it might take to move any of us along the spectrum and a little closer to understanding each other. I know that for me, it was you, Adrian. 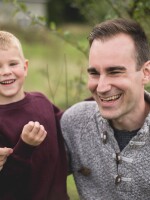 Robert Ullrich
Robert Ullrich is a Social Studies teacher at North Boone Middle School and lives in Rockford.
See stories by Robert Ullrich
Perspectives
Perspectives are commentaries produced by and for WNIJ listeners, from a panel of regular contributors and guests. If you would like to submit your own Perspective for consideration, send us a script that will run about 90 seconds when read -- that's about 250 words -- and email it to NPR@niu.edu, with "Perspectives" in the subject line.