Perspective: Living and learning on our farm, Part I

We are “lambing” our last time after twenty years. It all started Easter Sunday.

Dressed warm, I walked to the barn early that morning. As I got closer, I heard the unmistakable cries of a newborn lamb and caught sight of it standing in the feed lot all by itself. Several ewes were gathered on the other side of the lot.

Entering the barn, my mouth dropped. Lying in the straw were two other newborns with their attentive mother. I rang my husband’s cell on his way to lead worship in another town and described the confusing situation. He suggested I examine the sheep’s rumps in the feed lot for signs of giving birth. Seeing no such signs, I reentered the barn and moved the twins and mother into an enclosed and heated lambing pen and made sure her two teats had milk.

Back in the feed lot, I carried the lonely lamb into the barn and placed her in a pen next to the other one. And waited. And wondered. Is this is a set of triplets, only birthed in separate places? As if to answer, the single lamb started crying. And in the next pen, the mother’s recognition chortle completed the answer.

Reuniting the whole family, I was relieved and teary. Later I realized what I learned that day. Staying calm enough in the face of confusion and anxiety, I was able to function in a thoughtful way to solve this mystery.

I’m Connie Seraphine and that is my “Living and Learning” Perspective. 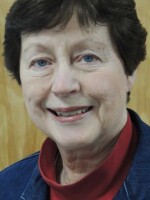 Connie Seraphine
Connie Seraphine is a Sycamore-area writer and poet.
See stories by Connie Seraphine
Perspectives
Perspectives are commentaries produced by and for WNIJ listeners, from a panel of regular contributors and guests. If you would like to submit your own Perspective for consideration, send us a script that will run about 90 seconds when read -- that's about 250 words -- and email it to NPR@niu.edu, with "Perspectives" in the subject line.