Perspective: The weirdest feeling ever

Nostalgia is the weirdest feeling we deal with as humans. I say this because of a conversation I had with a friend at a Wing Stop late one night. He said that he missed the days of the pandemic. At first, I was stunned. “How could you miss the days when it felt like the world was falling apart?” Then he explained his reasons and I agree with him too.

The early days of the pandemic felt like life came to standstill. All my responsibilities did not feel as big as they feel now. Classes just transitioned online, and they were easier. I didn’t need to work during that time. I spent most of my days just sitting around watching Netflix or TikTok.

As I was thinking about those early pandemic days, I seem to remember more of the positives than the negatives now. That is why I think nostalgia is so odd. Psychologists who study this feeling reached the same conclusion. According to an article by the New York Times, Swiss doctors considered nostalgia a disease. Many soldiers during that time were homesick, and the doctors thought such feelings were not normal . Now psychologists have found many positive health benefits for nostalgia. They even found that nostalgia can make your feel warmer physically.

So today, just take some time and stop to smell the roses no matter what you are going through. Because with nostalgia, you’ll remember the scent of the rose more than the thorn. 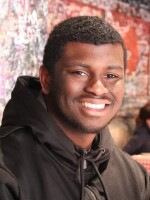 Jabari Cox
Jabari Cox is a student at Northern Illinois University, pursuing his Bachelor's degree in Computer Science and a minor in Spanish. He was born and raised on the small Caribbean island of St. Croix. Jabari has a love for God, music, computers, and other world cultures.
See stories by Jabari Cox
Perspectives
Perspectives are commentaries produced by and for WNIJ listeners, from a panel of regular contributors and guests. If you would like to submit your own Perspective for consideration, send us a script that will run about 90 seconds when read -- that's about 250 words -- and email it to NPR@niu.edu, with "Perspectives" in the subject line.