No deal was reached during a weekend negotiation session. But, both sides submitted formal proposals. 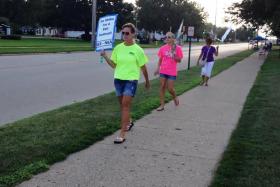 Galesburg teachers and the school district spent four hours at the bargaining table with a federal mediator.

Galesburg Education Association Spokeswoman Tami Qualls said after the Sunday meeting that only one sticking point remains. She said it is over recall rights which help protect teachers if there are layoffs.

"This is progress and I keep thinking this is a positive step, but we are trying not to get our hopes up to high because there is so much that is out of our control."

In a statement, Superintendent Bart Arthur said the board's proposal addresses all the remaining issues the GEA has with its employment.

The two sides could meet again Monday. Although the next negotiation session with a federal mediator is not scheduled until Tuesday afternoon.