He Came, He Raised Money, He Rode A Furry Bike

Our roving reporter, Dan Libman, returns with a story about last weekend's "Tour de Frost" bike ride around Rockford. The 6th annual event raised money, and bicycles, for the Rockford Rescue Mission. It was organized by Team Fur Bandit, a group that describes itself as "North America's premiere professional fur-covered bicycle cycling team." Libman, an avid cyclist, wrapped his bike in tacky shag and joined the dozens of participating riders. He also brought an audio recorder and even attached a video camera to his handlebars. Here is his story...

I’m heading out for a bike ride: inflate my tires, check. Fat tire bike covered in fur, check. Saddle bag has extra tube, CO cartridge, and emergency dub: check check check. I’m ready. The only problem is it’s December. And Cold. And you may be right to think me crazy to ride in these conditions, but then what’s wrong with the other fifty people riding with me?

"Well, I think the original idea was to have fun, and go for a Winter bike ride.” That’s Russ Howard with the Rockford Rescue Mission. “Because it's cold, and everyone has to be wrapped up to remind folks that there are a lot of folks who live on the streets who are homeless who struggle during cold weather. So this will be a great help to them."

In fact, what we’re doing here is the Tour de Frost, an annual charity bike ride put together by the Fur Bandits, a Rockford bicycle club famous for riding bikes covered in garish, fake fur. The club and this ride is the brainchild of team leader DJ Wilson:

All the riders made a financial donation to be a part of the ride, many also brought winter clothes and used bicycles, which the Fur Bandits will restore for the Rescue Mission.

“I think the best thing about going on a Team Fur Bandit ride is that the rides are for charity, they're fun, and we have escorts. Which makes for a safe ride," says Rockford resident Patrick talking about ride safety.

In fact, the lead escort vehicle is a van towing a pirate ship like a parade float, complete with Fur Bandit Jolly Roger and masts doubling as bike racks. Safety is a major concern when dealing with a crowd this diverse: road and mountain bikes being ridden at various skill levels, fat bikes being ridden by guys in clown wigs, we’re even accompanied by a pair of fully decked out Santas. And our ages? Let’s just say we’re between nine and... considerably older. But as our pirate crew sets sail down State Street the promptly at 10 a.m., it’s clear the Fur Bandits have a clever solution for keeping automotive traffic from splitting us up.

"You basically put yourself between the cars and the rest of the group.”

It’s called “Corking,” and Fur Bandit Josh explained how it works as we pedaled up Fairview road, one of Rockford’s few challenging hills.

“It's a technique that came up in Critical Mass rides of the 90s," he says. "For a group like this, while we don't want to block traffic, we just want to keep everybody together for the safety of everyone involved."

West on Charles we go, then back to State Street to see the freshly holiday’d downtown Rockford, where the sight of 50 furry bike riders on a Saturday seems not to elicit much more than a few friendly waves and a rushed selfie or two from pedestrians. We pedal north on Main until we reach our first rest stop, The Olympic Tavern, where our bikes fill their parking lot, and our spandex fills the bar.

11:00 a.m. may seem a bit early for a beer, but hey, when you’ve been riding a bike for almost an hour.... As one of the riders pointed out, It’s noon somewhere.

This was really the first chance I got to talk helmetless and I asked Rockford resident Paul what he thought of the ride so far:

“We’re safer because nobody’s going to get to close to us. Even coming down Charles St., which is a little tight, the cars were respectful and I think part of it's the cars at the back and you guys riding down the sides. I'm really impressed.”

I also got a chance to talk to a trio of riders from Madison, one of whom was on a fixed gear bike, or fixie as it’s known in the hipster circles in which I run. Fixies have no freewheel on the drive train so that means the rider has to pedal constantly. I asked him what is the advantage is of riding fixie.

“I like the simplicity of it," one man says. "I like not having to worry about all the tune-ups and gears, and worry about something breaking down. It sounds like a cliché but you feel at one with your bike, you know?”

All that hipster cred comes at a price, of course. Fixies can be dangerous because they don’t coast. Most don’t even have brakes. His companion rides a fixie bike with a flip hub that can be switched to single speed. "It's a single speed so it's, yeah, I can coast," she says. "I've done fixed gear on it before and I ended up bloody."

After some Tour de Snacking and Beering we were back on the road, mood elevated. Two years ago on the Tour de Frost we rode in single digit temperatures. Last year we contended with a fierce wind. This year, temps in the 40s and sunny, it felt comfortable enough for the whole family. After turning east on Harlem I caught up with nine year old Kathryn:

"You think you'll do it again?"

Climbing the hill on South Perryville I talked to Fur Bandit Bill. At over six feet Bill may be the tallest Fur Bandit on solid ground. When you add the additional four feet his custom built furry tall-bike adds, he towers over the rest. I asked Bill what he could see from his vantage.

"From the view up here, it's been amazing to see this many people show up for an event in Rockford to benefit the homeless," Bill says. "We have a great turnout, great weather. It's been an amazing day."

"I'm guessing this bike is a lot more fun when you're not going up a hill like this," I reply.

"Yes, it does present its own set of challenges (huffing)."

A few minutes later we pedaled past the Peak Fitness club, an indoor athletic facility with a full parking lot and—no doubt—a room packed with men and women on stationary bikes. One of our more obnoxious riders attempted to unsuccessfully rouse the Tour in a childish but grammatically correct taunt.

“What I'm trying to say is, WE ARE BETTER THAN THEY!"

At Riverside and Perryville we stop at Rockford Bicycle Company where owner Skip treated us to cookies and beer—the exact snack Santa would want if Santa ditched the sleigh and rode fixie. In fact our two Santas tucked right in.

Finally, early afternoon, our happy and bedraggled group of selfless peddlers completed the loop. Back on State street we chained our bikes for a celebratory debriefing over pizza and a couple more pints at Oscar’s Pub. Rider Scott talked about the differences between this ride and so many others:

“Let's get in the Aero Position and go fast,'" he says mockingly. "Well, here it's `Let's have a chat. Let's meet some new people and eat way more than we expend in energy on the bike ride.' So I'm going home quite a bit heavier than when I arrived."

Fur Bandit Max was pleased. "This is maybe the first ride we've done where we had no cars that honked angrily at us," he says. "There was a ton of support honks. Sometimes on Perryville it gets a little hilly and everyone spread out. But everyone stayed together, everyone looked out for each other, and the cars were not trying to kill us today."

Second-time rider Paul added. "Next year if we could get Tim Hanson and the Mayor riding with us to actually see what the roads are -- overall not too bad a shape," he says. "But Charles St. was kinda tough."

I hope the Hizzoner and the public works director are listening! In the end, as one rider told me, we started out high-minded grown-ups up doing a charity ride, but ended up back as the children we once were, just riding bikes with friends, a big pack of kids being silly and having fun. As young Kathryn put it when I asked her the best part of the ride:

The bike riding indeed. With 56 registered riders, we pedaled a total of 23.7 miles, raised a bunch of money, collected winter clothing, received 11 donated bicycles to restore. Along the way we hit two bars, one bike shop, ate a ton of pizza, drank lots of beer, and best of all, made new friends we’ll be seeing on the trails, and to whom we’ll be shouting on your left, as we pass, leaving them to wonder, who was that handsome, furry rider?

Dan Libman is an NIU English faculty member and author of the story collection Married But Looking. He lives in Oregon, Ill. 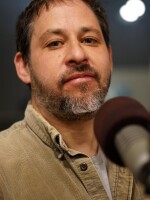