I attended a vintage car show and swap meet this summer, and it made me think of the power of objects to help hold memory. The ride to Byron was beautiful, with trees lining the single road along the Rock River.

The festival featured a simple dragway flanked by bleachers and a concession stand. There was an area for memorabilia like coon-tail keychains and license plates catalogued by state and year. A rusty 1940 motorcycle was saved from oblivion by the owner’s grasping nostalgia, who brought it to the swap meet with a sign saying, “Not for Sale.”

A parking area displayed cars from 1930 to 66, whose owners were eager to chat. Some cars evoked films and books like On the Road, where a ’49 Commodore plays prominently in Kerouac’s tribute to the variety and grit of nomadic life in 1950s America.

This nostalgia for old American cars made me feel I was in a land of dreams I’d never had.

But not entirely. Many of the racers and enthusiasts were weathered men having fun and laughs around their restored cars, those reservoirs of remembered experience, time-capsules from when they had their first love at school, perhaps a heartbreak, the birth of their first daughter, and their last memories of Dad.

I looked beyond the racetrack where the Rock River flowed under a giant moon, and I pondered how we can all appreciate the charged air and conjured power of old objects, even when they aren’t ours. 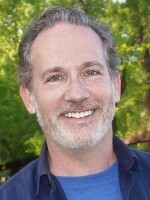 Bill Gahan
Bill Gahan, English department chair and Faculty Trustee at Rockford University, is a native of Madrid, Spain.
See stories by Bill Gahan
Perspectives
Perspectives are commentaries produced by and for WNIJ listeners, from a panel of regular contributors and guests. If you would like to submit your own Perspective for consideration, send us a script that will run about 90 seconds when read -- that's about 250 words -- and email it to NPR@niu.edu, with "Perspectives" in the subject line.