As the Earth warms, city parks will become climate oases

Our next story grew out of a simple question - where do most Americans come face to face with climate change? For a lot of us, our closest connection to nature happens at our local park. As the Earth warms, city parks will become more and more important as climate oases.

This past summer, Rebecca Hersher and Ryan Kellman of NPR's Climate Desk teamed up with NPR's Short Wave podcast to bring us this day in the life of one city park. Short Wave producer Margaret Cirino takes it from here.

UNIDENTIFIED PERSON #1: How are you doing?

MARGARET CIRINO, BYLINE: I'm good. How are you?

UNIDENTIFIED PERSON #1: Oh, I thought you wanted my autograph.

CIRINO: So a few weeks ago, I spent the day in Philadelphia - like, literally one day. That was the assignment - spend 24 hours in Fairmount Park and record everything that happens.

I'm standing outside the Philadelphia Museum of Art on those steps where "Rocky" was filmed - that iconic scene - except I haven't seen the movie. And it's really, really hot out. It's so hot. I'm sweating.

To be clear, this was not my idea.

RYAN KELLMAN, BYLINE: Yeah, I'm sorry. It was my idea, sort of - mine and Rebecca's.

REBECCA HERSHER, BYLINE: Yeah. We were trying to capture something that's really big. It's hard to capture - what climate change feels like.

KELLMAN: Yeah, this all started with a pretty simple idea. You know, most people in the U.S. live in cities. Actually, at least 80% of the U.S. population lives in urban areas.

HERSHER: Which means city parks are one of the places where most Americans actually feel climate change happening. So we wanted to really zoom all the way in on one city park. And we chose Fairmount Park in Philadelphia. It's gigantic - one of the biggest city parks in the U.S. And we visited on a really, really hot day in August.

UNIDENTIFIED PERSON #2: You got it...

UNIDENTIFIED PERSON #3: And it's hairy.

UNIDENTIFIED PERSON #5: And so you have...

UNIDENTIFIED PERSON #6: I got chicken liver. I got worms.

UNIDENTIFIED PERSON #7: (Inaudible), you got to come on.

KELLMAN: What do you guys get out of coming to this space in this city?

UNIDENTIFIED PERSON #10: That's a tough one.

UNIDENTIFIED PERSON #10: Give me a minute. It's free. It's, like, you could do whatever you want.

UNIDENTIFIED PERSON #12: Well, I guess if you want a one-word answer, just, like, pleasure. I mean, yeah, it's nice out, dude.

ZEMELA POPE: So I am Zemela (ph). I'm the owner of Zem Soul. So I'm just selling food. I got some fish, sticky wings, jerk. Real good - it's real good.

UNIDENTIFIED CHILD #3: Excuse me. You think you could jump up there and get my ball?

KELLMAN: So by this time, it's about 7 p.m. and still pretty hot out. We wanted to go to a more tree-y place...

KELLMAN: ...Because green spaces - tree-filled places - are a lot cooler than spaces that have a lot of pavement and buildings.

HERSHER: It can be five, even 10 degrees cooler in some cases, which is a huge difference. And climate scientists and urban planners will tell you that's one reason that everyone who lives in a city should really have access to green space, especially as heatwaves get more common with climate change.

KELLMAN: So we went to a bit of a more lush part of the park between a river and a busy road just to see who was out.

JELANI BROWN: Well, my name is Jelani (ph). Right now, we are looking at the water. We are on the edge of the Schuylkill River. It's like a getaway out of the city, even with all the hustle and bustle of gentrification - school, crime, bills (laughter).

HERSHER: What do you think about when you look out at this river?

UNIDENTIFIED PERSON #14: You know, I think I checked it out.

KELLMAN: OK. So by now, the sun had gone down. The streetlights were on.

HERSHER: Yeah. And I was deep in the park at this point. There wasn't really anyone around, and I found some grass, and I just lay down.

In the 24 hours that we were in Fairmount Park, I saw two foxes, actually; a bunch of cottontail rabbits; a Cooper's Hawk; multiple types of ducks. It felt like a wild place, not just a human place.

So take a moment. Listen to these animals communicating with each other, calling out for mates, marking territory. This is the sound of nature in the city.

HERSHER: Yeah, not very long to sleep. But one thing I noticed was that in those few short hours, the animal sounds in the park changed dramatically. For one thing, the speed of the cricket's call increases when it's warmer, and we arrived back in the park right at sunrise, when it was warming up.

CIRINO: So by mid-morning, the park was, like, filling up with people doing Saturday stuff. There was a softball team practicing for something called the Gay World Series.

HERSHER: Yeah. And right near where they were practicing, the guys from the local social lodge were setting up for a huge cookout.

UNIDENTIFIED PERSON #15: I know. I bet it does.

KELLMAN: Studies actually show that being outside can help relieve feelings of sadness, stress and isolation.

KELLMAN: The air, the sun.

UNIDENTIFIED PERSON #17: Especially for the last two years for me in particular because I've been working from home since the pandemic. So it's nice to be able to get outside and actually see people rather than just see them on Zoom or hear them over the phone.

UNIDENTIFIED PERSON #19: Well, we're lucky because we live out here. You see that tunnel right there? We live on the right side in a tent.

HERSHER: Oh. How is that for you?

UNIDENTIFIED PERSON #19: It's great because we're under the bridge, so we're, like, protected from water, and it's cool. And then we have occasional - well, you see, we have...

UNIDENTIFIED PERSON #19: Sometimes we come home and we find people smoking meth in our area.

UNIDENTIFIED PERSON #20: They're getting high.

UNIDENTIFIED PERSON #19: Yeah, sometimes we find that. But mostly, we've not really been robbed. For the most part, nobody really bothers us. And for the most part...

HERSHER: OK, and with that, we have not fully finished our journey.

HERSHER: So it is time to return to where we began. It's going on noon, and we need to go to the Museum of Art - the steps at the southern end of the park where Margaret started her journey on Friday.

HERSHER: Ryan, are we going to run up these steps?

KELLMAN: I mean, we're here. Feels like somebody has to run up the steps.

HERSHER: You said somebody, not yourself.

KELLMAN: It is very hot. All these people have Italian ice, and I don't.

HERSHER: I'll run up the steps with you.

CIRINO: This is producer Margaret Cirino back at high noon once again. And it's Saturday now.

Rebecca Hersher
Rebecca Hersher (she/her) is a reporter on NPR's Science Desk, where she reports on outbreaks, natural disasters, and environmental and health research. Since coming to NPR in 2011, she has covered the Ebola outbreak in West Africa, embedded with the Afghan army after the American combat mission ended, and reported on floods and hurricanes in the U.S. She's also reported on research about puppies. Before her work on the Science Desk, she was a producer for NPR's Weekend All Things Considered in Los Angeles.
See stories by Rebecca Hersher

Ryan Kellman
Ryan Kellman is a producer and visual reporter for NPR's science desk. Kellman joined the desk in 2014. In his first months on the job, he worked on NPR's Peabody Award-winning coverage of the 2014 Ebola outbreak in West Africa. He has won several other notable awards for his work: He is a Fulbright Grant recipient, he has received a John Collier Award in Documentary Photography, and he has several first place wins in the WHNPA's Eyes of History Awards. He holds a master's degree from Ohio University's School of Visual Communication and a B.F.A. from the San Francisco Art Institute.
See stories by Ryan Kellman 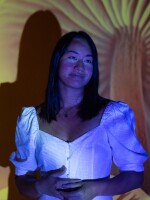 Margaret Cirino
Margaret Cirino (she/her) is a production assistant at Short Wave, NPR's daily science podcast. Her job involves pitching, producing and forcing her virtual and in-person co-workers to play board games with her. She has a soft spot for reporting on cute critters and outer space (not at the same time, of course).
Latest Stories