Nov.11th. Veterans Day. Our salute to everyone who serves or has served in the military.

Many of us, though, will reflect on parents and grandparents who fought in the World Wars.

It's estimated that more than 167,000 of the 16 million Americans who served in World War II are still alive, now in their 90s or older.

They all have important stories to tell. But many have not.

"How can we sit around the supper table, describing to our children such a landscape of images that happened days, weeks, months apart? We see the body rising from the exploded mine but we don't remember seeing it fall.

"I didn't mourn," he said. "When fellow soldiers were wounded or killed, we took their weapons and ammo and moved forward. Our feelings were turned off. It was the way we survived."

He concluded, however, that recording these memories is important, saying:

"If we who were there do not tell of war, the stories will be left to the historians, the novelists, the myth-makers, the moviemakers, the politicians — those old men who send boys to kill boys like themselves."

So yes, telling their stories is important. More important is listening — to what they say. And do not say. 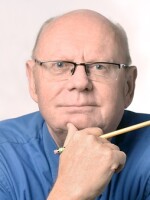 Lonny Cain
Lonny Cain, a graduate of the journalism program at Northern Illinois University in DeKalb, has been in the newspaper business for more than 45 years. He and his wife have three sons. They live in Ottawa, where he was managing editor of the local daily newspaper for 30 years, retiring in December 2014. He continues to be a columnist for The Times in Ottawa and is pursuing other writing projects.
See stories by Lonny Cain
Perspectives
Perspectives are commentaries produced by and for WNIJ listeners, from a panel of regular contributors and guests. If you would like to submit your own Perspective for consideration, send us a script that will run about 90 seconds when read -- that's about 250 words -- and email it to NPR@niu.edu, with "Perspectives" in the subject line.