Perspective: Do you really want to be the Pioneer Penguin?

Penguins in the South Pole fish in sea wasters that contain both tasty snacks and deadly seals. So they have evolved a way to nudge one of their numbers to swim around to see whether or not the seals are lurking among the fish.

This might be called the Pioneer Penguin, or PP. The PP is in maximum peril and may be eaten just so every other penguin can have valuable information.

It is laudatory to be a pioneer, but I for one don't care for the idea. In Hollywood it was often said that when it came to breaking barriers, everyone was dying to be second. Pioneers de-bug the future for us, but it's dangerous work. I am number 219,102,457.891,432 when it comes to flipping a light switch. I'm glad I wasn't the first.

This is Tom McBride; that's my Perspective. 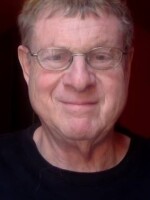