My neighbor Janet called crying about a bird. Can you come over and do something? she asked. I could already hear the sobs in her voice. It was a redtail sitting in her yard unmoving. Just staring off. You could walk right up to it, she said. Just to be sure, I called the rescue place, but there was no way, not with the avain flu outbreak. One sick bird might be the end of every raptor there.

So I packed some things and headed down to Janet’s. She’s all alone there, since her husband died, and her old place is all covered in moss. Janet came out in her duck coat. She looked like herself, but when we hugged I could feel her hollow bones.

At first I thought a branch had fallen, she said, and then I put on my glasses and saw, Hawk.

We walked up to the big raptor on the grass. It couldn’t hold itself upright, but its eyes still focused. Janet had put cut grapes on a kid’s shovel in front of the lethal beak. Like pudding for a geriatric. It’s just the most awful thing she said. I’m glad you could come.

This hawk was one of dozens dying in the county every day. The eagles brought the virus back to their nests. At the rescue place the phone kept ringing. Every call meant another doomed raptor, and there was nothing anyone could do.

You can go in, I told Janet, and she did. She seemed to want to hurry away. Alone with the hawk. I had two choices. One of them was immoral, and the other one illegal. I won’t say what wrong choice I made. 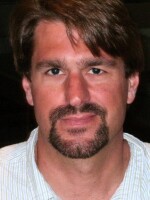 Chris Fink
Chris Fink is a professor of English and Environmental Studies at Beloit College. He is the author of Farmer's Almanac, A Work of Fiction.
See stories by Chris Fink
Perspectives
Perspectives are commentaries produced by and for WNIJ listeners, from a panel of regular contributors and guests. If you would like to submit your own Perspective for consideration, send us a script that will run about 90 seconds when read -- that's about 250 words -- and email it to NPR@niu.edu, with "Perspectives" in the subject line.