Perspective: So why can't I donate?

Beyond the general crush of pandemic-induced existentialism, last night I was kept awake by a headline about how we’re seeing the worst blood shortage in a decade.

Along with only 7% of the population, my blood type is O negative. Anyone on the planet can accept my blood, so in high school, I donated as frequently as I could. Once I got to college, like many students, I became sexually active. Imagine my surprise when I went to my first campus blood drive and was declined. “Men who have sex with men” (in the stark jargon of the medical world) were banned. The rule was instated in 1983 to prevent the spread of HIV. Since then, testing for the virus has improved, and now all blood donations are screened prior to transfusion. In 2015, the rule changed: we could be reinstated to the ranks of the giving—if we were celibate for an entire year. That period has since been shortened to three months. Even the Red Cross agrees: donor eligibility should not be based on sexual orientation.

I’m reminded of Coleridge’s ancient rime; “Water, water everywhere, nor any drop to drink.” Except in this case, there’s more than a drop. There’s an entire cardiovascular system of universally acceptable nectar coursing through my arteries. I would give it if I could. But it turns out being a practicing homosexual trumps being a universal donor, even amidst a global blood shortage.

If you can, visit redcrossblood.org, schedule a donation, and then take action to end this prejudiced ban. Do it for the Queers! 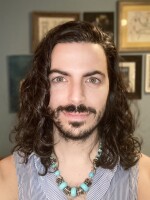 Frankie DiCiaccio
Frankie DiCiaccio is an actor, theatre-maker, and arts educator.
See stories by Frankie DiCiaccio
Perspectives
Perspectives are commentaries produced by and for WNIJ listeners, from a panel of regular contributors and guests. If you would like to submit your own Perspective for consideration, send us a script that will run about 90 seconds when read -- that's about 250 words -- and email it to NPR@niu.edu, with "Perspectives" in the subject line.