I’m one of those people who fought for my parents’ things—first with my brother and then with his widow. “Your brother thought you were stripping the house,” my cousin John said. “But when I saw how little you’d taken, I scolded Clayton.” An auction would have saved some heartache, but my brother’s rage wore me out.

The last time I saw Clayton alive, I took the tin horn, a relic from the anti rent wars in upstate New York, a rebellion against indentured servitude, but feeling guilty, I returned it before we left for Belvidere. His widow said he blew it so that it echoed along the Normanskill valley. Our parents blew it to call us home from the next valley over.

The day of his funeral, I signed off my rights to Clayton’s will, as soon as I stepped out of the limo, to be kind to his grieving widow, but later we argued over my parents’ things. My lawyer said, "Drop the fight over antiques. They are not yours or hers. I collect Civil War stuff. As I age, I see they'll be here after I'm gone.” Later, Clayton’s widow gave me the tin horn, a broken table, my mother’s porcelain doll.

When John visited after twenty years of silence, he admired the tin horn. “Take it,” I said. “You’ll appreciate it more than me.” My lawyer was right, we’re mere custodians. It was time to pass it along.

I’m Katie Andraski. This is my perspective. 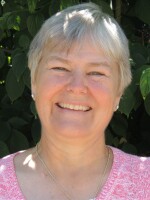 Katie Andraski
Katie Andraski is an author, blogger, and retired composition teacher at Northern Illinois University
See stories by Katie Andraski
Perspectives
Perspectives are commentaries produced by and for WNIJ listeners, from a panel of regular contributors and guests. If you would like to submit your own Perspective for consideration, send us a script that will run about 90 seconds when read -- that's about 250 words -- and email it to NPR@niu.edu, with "Perspectives" in the subject line.