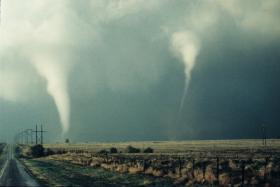 Editor's Note: This story has been updated.

At least one tornado struck Pontiac, Illinois Wednesday night causing heavy damage and at least three injuries. Information is still being collected by fire and law enforcement officials, though some reports indicate children were among those injured when a mobile home was destroyed. The Fire Department said overnight "some injuries appeared to be somewhat serious."

Fire officials said the twister may have touched down about 2000 North and 800 East Roads in Livingston County about 10:30 p.m. The tornado tracked diagonally toward the town and entered Pontiac around the 197 mile marker of Interstate 55. That's the Route 116 exit.

There is damage to an Amoco Station and Convenience store. Winds knocked the canopy down, overturned an empty semi tractor trailer. Across the road there was a partial building collapse at a Shell Convenience Store and damage to the front of Wal-Mart in Pontiac.

Fire Chief Scott Runyon said he was under the tornado briefly, shortly after it touched down.

Runyon said he was heading north at about 900 East Road watching the storm and cloud formations when visibility "went to nothing" as he drove past a farm house. Tree limbs hit his car as winds buffeted it.

"Heavy winds, rain, and I knew I shouldn't have been there, to say it mildly," said Runyon.

Runyon said he floored the vehicle and got through the worst. When he turned around and came back, he saw a tree across the road, the barn was leveled, heavy damage around the house, power lines torn away, windows broken, tree limbs through the roof, and three vehicles were smashed by trees.

He said it was pretty close.

"You kinda have a question whether you're going to get through that one. At one point I really thought the car was probably going to lift. But, it didn't, so I was thankful for that. You know that light feeling you get," he said.

The twister stayed on the ground heading southeast and went through the corner of a mobile home park, destroying one and causing the injuries.

On the south end of Pontiac, first responders say there is minor home damage, trees through roofs and things like that, as the tornado exited town.

Pontiac firefighters called in quite a bit of help. Runyon said it was needed, because right after the tornado exited, they had a building fire. He said he doesn't have the full report on that yet either.

Runyon said it could have been worse.