The Galesburg teachers union and school district had some success during a 12 hour negotiation session with a federal mediator Wednesday that went into the early morning hours of Thursday. 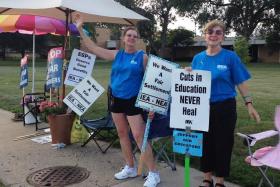 This morning, the contract proposal will go before the GEA's some 600 members for a vote. It will also need to be ratified by the school board. The all membership meeting is scheduled for 8 a.m. at Galesburg High School.

Qualls said the contract proposal also addresses how the 11 days of school students have missed because of the strike will be made up. Though further details were not provided.

The Galesburg teachers strike is in its second week. Contract negotiations between the union and district with a federal mediator have been ongoing since May.