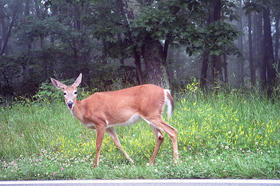 Deer can be more than a nuisance. They can be dangerous when they venture on to roads.

Illinois saw a one percent drop in the number of crashes in 2013,but there were still over 15-thousand accidents.  There was also a slight increase in injuries from those collisions and six people died.

Madison and Cook County led the way in the number of deer-vehicle accidents with well over 400 each.

While it's a concern year round, November is considered the month when you are at the highest risk for hitting a deer.  Most of the accidents happen on rural roads at twilight or at nighttime.

Want to avoid becoming a statistic?  Advice from the Illinois Department of Natural Resources is to slow down and watch for the animals, especially in areas where they have been spotted before.

If you are involved in accident, you are advised to contact authorities and do not attempt to remove a dead or injured deer from a busy road.

The top 10 counties for collisions involving deer in 2013 were: