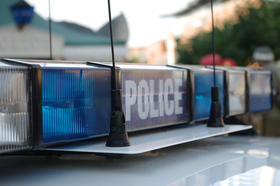 A newly released survey shows a majority of Illinois residents are satisfied with the performance of their local police department.  But the numbers also show differences of opinion along racial lines.

The statewide survey shows overall, 7 of 10 people in Illinois give police good marks.  But African Americans are more split, with only about half giving a commendable rating.

Professor Charlie Leonard is with the Paul Simon Public Policy Institute at SIU Carbondale, which conducted the polling. He says another finding stands out:

"White Illinoisans who live in diverse neighborhoods are more likely than other whites in the state to say police departments should demographically represent their communities," said Leonard.

Leonard believes that whites in those areas are more likely to pay attention to the makeup of a police force.

The survey was conducted in the weeks after unrest in Ferguson, Missouri where an officer shot and killed an unarmed black teen.  Images from Ferguson showed police using military style equipment to control protestors.

Leonard says the poll also found 3 out of 5 Illinois residents think police having those types of weapons and vehicles is a bad idea.  African Americans are even more opposed.