Many people are aware that the Illinois Lottery helps fund schools. But just how much do the proceeds actually help? Well, that's what we aimed to find out: 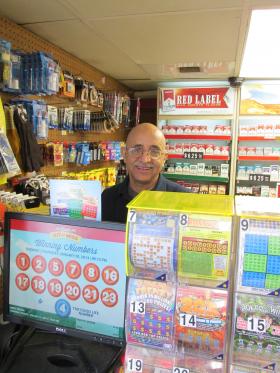 Listen
Listening...
/
Listen to the story from the WUIS Education Desk...

Most of the money for the state's public schools K-12 come from local sources, like property taxes. The state contributes a large portion as well, and the lottery profits are part of that, but just how much? To find that out, our first stop is the Hometown Pantry at the intersection of Edwards and MacArthur in Springfield.

John Terab is the owner here. At the counter up front, a display case with around 30 varieties of scratch-off lottery tickets sits, as well as the machine that prints off numbers for the games like, “Pick 3.”On the wall, winning scratch off cards are posted with receipts that show how much the winners got. Terab says some his customers acknowledge that the money they spend on the lottery is going toward education. “That’s what they say, some of the good people. They say, ‘OK – gonna try my luck, if not - it’s going to go to the school,” explains Terab.

Maurice Johnson is one of those people. He’s a 51 year old truck driver who says he buys lottery tickets at least a few times a week: “To win money so I can retire.” He says he knows some of the proceeds go to schools, “I like to help out the schools, yes I do," says Johnson. Though like many people, he can’t say exactly how much his dollars are really helping. To figure that out, we'll turn to Mike Lang, he’s with the Illinois Lottery.

Lang's going to break this down for us. If someone spends $1.00 on a lottery ticket, this is where the proceeds end up, says Lang: “The biggest chunk of that, 61 cents, would go for prizes … There’d be about 6 cents that goes to selling commissions and selling bonuses for the retailers … 5 % is kind of the 'other category' … And that leaves us with about 28 cents for the good causes we support."

Those good causes include things like veterans, cancer research, and building projects. But most goes to schools. Over the past few years the lottery has contributed about $650 million dollars to schools on an annual basis. Which might sound like a lot, but according to Lang: "People don't realize the magnitude of money that's required. 28.7 billion dollars is what we spent in school year 2011-2012 ... That's a lot of money." Lang shows me a newspaper. The headline is from the Chicago Sun-Times, the year is 1973. It reads, “Lottery, (and) RTA Bills Okd, Go To (governor) Walker.” We'll get to that in a second, but first, some people call all of this a shell game.

Some people call all of this a shell game. "The term shell game is used a lot and that's really what happened. When they sold the idea of the lottery originally they said all the proceeds would go to education,” says Ben Schwarm. He’s with the Illinois Association of School Boards. He says the lottery’s benefit to schools is negligible, since it’s money the state would probably provide regardless of the source. “It was a net neutral for school districts ... It did not supplement what was there - I think a lot of people assumed it would be on top of what they were giving schools anyway,” he says. Schwarm says to this day his organization is frequently asked where exactly money from the lottery actually goes.

Charlie Wheeler, the former Sun-Times reporter who wrote that decades old article Lang showed me earlier, doesn't agree that the lottery funding is a "shell game" - but he does say misconceptions abound.  “I would say the lottery for me is probably the biggest urban legend that exists in state government ... This has been a long persistent legend and it will probably continue forever,” Wheeler says.

And there's another thing about this a lot of people don't realize, says Wheeler. As he reported 40 years ago, the lottery was originally intended to help Mayor Richard J. Daley get the Regional Transportation Authority in Chicago and the collar counties up and running. The political chatter was always that the lottery would benefit schools, but it didn't even really start out that way.

Back to the lottery’s Mike Lang. “We are about an inch or two inches the bucket. We're more than a few drops, we're a couple inches in the bucket and that's all we're ever going to be," he says. And as school districts struggle to make ends meet, every drop helps. But the lottery only contributes about 2% of what schools in the state get on an annual basis. So just like you probably shouldn't bank on winning the lottery for your retirement, schools can't bank on the lottery's money as a saving grace either.