Teachers in Galesburg say they're frustrated by the lack of progress in contract talks with the district. 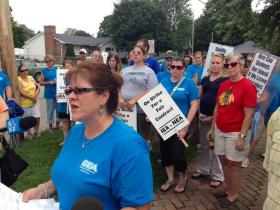 Galesburg Education Association President Dave Sharp said during a press conference Thursday afternoon that a successful negotiation requires two participating parties and that hasn't been the case with the district.

Sharp said what they want is a fair contract. Teachers are asking for raises, safe working conditions and just cause for dismissal. They also take issue with how teachers are being evaluated and when they can retire.

Still, Sharp said the GEA will continue to submit proposals until the district agrees to one.  GEA Spokeswoman Tami Qualls said the district has not submitted any new contract proposals since the strike before began last week.

Superintendent Bart Arthur said movement was by both sides during marathon negation sessions earlier this week. But he said many contractual issues remain.

"Both sides are working as hard as they can to get this thing settled," Arthur said. "We are all in the business to educate kids and this bothers me as much as it does everyone involved."

Arthur said they're even at odds on how long of a contract to agree to. The district wants a three year contract and teachers are asking for two years.

The next negotiation session with a federal mediator is scheduled for Tuesday afternoon. Arthur said if they reach a deal then school could start before the end of the week.