Fracking Rules Action Delayed; Could Be A Sign Of Revision 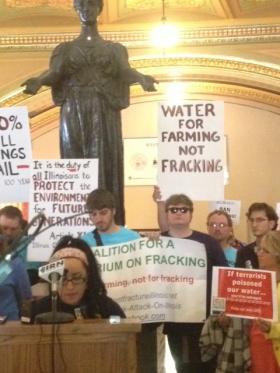 It will be at least another month before legislators take up regulations of hydraulic fracturing. The Joint Commission on Administrative Rules, or JCAR -- a bipartisan panel -- voted Tuesday to spend more time reviewing, and potentially rewriting, them.

The oil and gas industry and other fracking proponents has bemoaned how long Gov. Pat Quinn has taken to put rules in place. It has been well over a year since he signed a law legalizing it, but before companies can begin drilling, those rules must be finalized. And yet, the Illinois Manufacturing Association's Mark Denzler cheered the delay, saying "this is very good news for us."

That's because Denzler doesn't like the latest draft of rules drawn up by the Department of Natural Resources; fracking advocates basically say they're too onerous. Denzler says it's a good sign that legislators want to take more time with them. It's a signal the rules will change.

Environmentalists, who have concerns including that fracking will taint Illinois' water supply, also want the rules tweaked, though they're much happier with this version than DNR's initial draft (which the fracking industry did like).

JCAR is set to meet again in a month, and changes to the rules could be presented and voted on then. If not, there is one more JCAR meeting left in early November, ahead of a looming deadline. The rules have to be in place by Nov. 15, or the process starts over.

A pro-fracking coalition that Denzler's a part accuses the Quinn administration of holding off on rules for political reasons, the notion being that Quinn's agency wanted to avoid angering environmentalists ahead of the Nov. 4 election. DNR administrators deny that, and say they carefully considered copious public comments.

A coalition of labor unions and members of the oil industry is asking Illinois lawmakers to step back in the fracking process.

State officials are still working on the rules to govern hydraulic fracturing.

Jim Watson heads the Illinois Petroleum Council. He says Illinois is losing an opportunity to bring in energy companies.

Governor Pat Quinn says he has signed into law the nation's toughest regulations on "fracking" – while unlocking the potential for thousands of jobs.