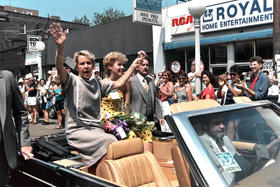 CHICAGO (AP) -  Jane Byrne, Chicago's first and only female mayor, has died at the age of 80. Byrne's daughter, Kathy, says her mother died Thursday at a hospice in Chicago. With Byrne's election in 1979, she became part of Chicago history. And she was part of the city's lore because of a big reason why she was elected: Voters blamed the sitting mayor, Michael Bilandic, for what they saw as the city's slow reaction to a blizzard.

Byrne was credited with bringing major festivals to the city, as well as making it more welcoming to filmmakers who flocked to Chicago to make movies such as "Blues Brothers.'' She also made national headlines when she moved into a notorious housing project to draw attention to the gang violence there.