Flu Cases Are Ahead Of Schedule In Illinois 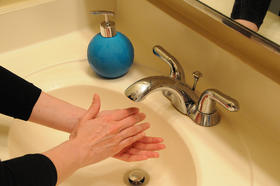 Illinois is reporting widespread flu activity earlier than most years.  Widespread means the flu is showing up statewide.  Illinois tracks people hospitalized for the flu. That number is above 200 with nearly half the cases in the week that ended December 13th.

Of course, that fails to count those who have the symptoms but are recuperating at home.

State Public Health Director Dr. Lamar Hasbrouck says one of the problems this season has been the flu vaccine... which was targeted against several strains of the virus.

"The problem is one of those strains has kind of changed over the season, it's kind of mutated," Hasbrouck said. "So you won't  get any coverage in the vaccine for that particular strain.  But that's no reason not to get your vaccination because it's still going to cover you for another 3 or 4 circulating strains."

Flu cases have led to high absentee rates in some schools.  Hasbrouck says the flu season typically peaks in January and February.  Washing your hands often is still among the best ways to prevent the spread.

He adds if you have severe symptoms, such as difficulty breathing or another chronic condition, you should see a doctor.