In Springfield, the west wing of Illinois' Capitol building is nearing the end of a two-year, $50 million renovation.

Workers are putting on the finishing touches. Everywhere you look, you see a balance between modern building requirements and historical details.

The door handles are flipper style — that's easier to use for people with disabilities — but they're cast with the state seal. There are lighted emergency exit signs, of course, but they're in an old-timey font.

The main purpose of the renovation was to address safety concerns — fire exits were said to be drastically insufficient. But since that would require effectively gutting the space, the decision was made to return it to what architects call the "period of historic significance."

Since that time, stenciling and scrollwork have been painted over. Spaces have been re-purposed. There was even an entire floor added — a mezzanine that had most recently been home to the Statehouse press corps. Alsop says these changes were not in keeping with the vision of that original architect, Alfred Piquenard. 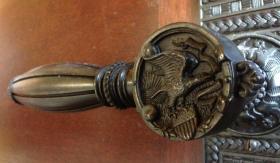 The current renovation removed the mezzanine and restores or recreates a lot of other French accents — like elaborate paintings and intricate chandeliers.

Money for the project came from a special construction fund -- not the regular state budget. The west-wing renovation comes after the House and Senate chambers were re-done several years ago. Alsop says the north wing is the next logical step, but there's no timeline for when that might happen.

Employees are set to begin moving back next month -- including the press, which will have office space in the basement, in what used to be the cafeteria.