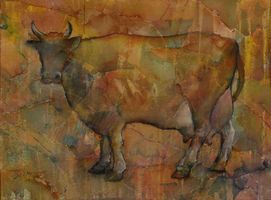 Gary Schirmer “Revisionist Grazing ” In series that he referred to at the time as “Bos domesticus”, the Latin for domestic cow, was a theme that he explored in the painting, drawing and printmaking mediums. Predating the wildly popular Cows on Parade exhibit of painted fiberglass life size sculpture by commissioned artists in Chicago in 1999, his personal exploration of the subject took place in graduate school at Southern Illinois University in 1989. The theme for him was an inquiry into the nature of the bovine species, and its symbiotic relationship with the human species, that transpired by way of the simple desire to use the subject as a life drawing subject. The work and theme has straddled a line between whimsical fancy, and an introspective rumination with regard to the nature of domestication, and the precarious place the animal occupies across planetary cultural and ecological strata. Depiction of the creature respectfully focuses on anatomy, personification, contextual juxtaposition, and formal aspects with regard to medium manipulation, on a variety of formats and grounds. This exhibit combines new work for a revival of the subject after 30 years from its conception, and old work that had been “put out to pasture” for some time, in mediums including painting, drawing, printmaking and photography. Gallery closed Sundays and Wednesdays.